ERASE started providing the Advanced Human Trafficking Investigations Law Enforcement Course in January of 2017. Many changes have been made to account for new laws, technology, trafficking trends, and above all, participant feedback. The current course curriculum was developed by Richard Hoffman, along with Victor Williams, and Sandra Sparks. Together they have expertise in local and federal law enforcement operations, investigations, and task-force leadership. In addition expertise in public policy, community engagement, and advocacy. 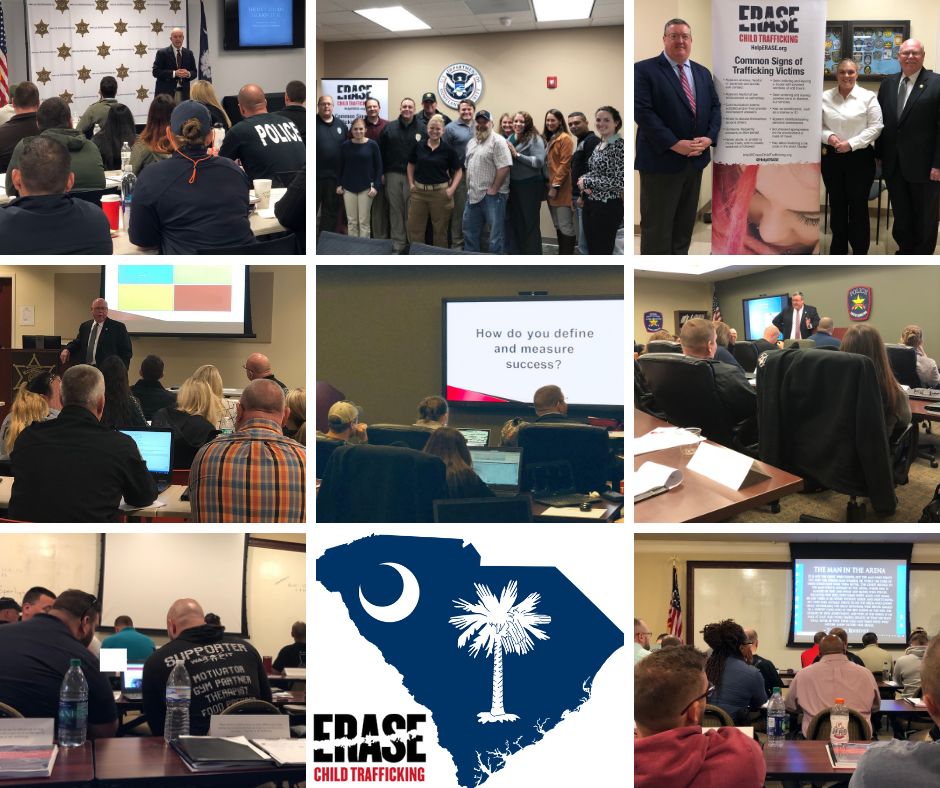 The goal of training is for officers to learn how to complete high impact investigations while being victim-centered. Lead instructor, Richard Hoffman, founder of IRIS Training and Consulting explains, “When teaching investigations on sex trafficking, one of the most common struggles for officers is differentiating between a prostitute and a person being prostituted. Every sex trafficking victim is forced or coerced to commit an act of prostitution. It is not always evident that these acts are being coerced or forced. Identification of victims and collection of evidence of coercion is a learned skill. A skill that must be taught and rehearsed to gain proficiency.”

The training covers the culture and mindset of human trafficking, principles, and practices of investigations and law enforcement tools and techniques. Due to regional and changing trafficking trends, Instructor Hoffman adjusted to the curriculum specifically for each class in South Carolina. The class includes several training labs for officers to gain experience utilizing new tools and technology. Throughout the class and during the labs, officers learn how to identify and recover a potential victim of sex trafficking. In addition, officers are provided training on a tool specific for law enforcement, created by Thorn and Digital Reasoning. Participants learn how best to use the tool as it applies to their investigations. Officers also learn the importance of focusing on the demand side of the commercial sex market. One of the labs covers how to use cost-effective deterrence methods to address sex buyers in their communities.

Instructors covered in-depth why using the victim-centered approach is imperative.  A victim-centered investigation is defined by Homeland Security Investigations,  as “where equal value is placed on the identification and stabilization of victims, as well as the investigation and prosecution of traffickers,” Emphasized throughout the class is the needs of a victim are a priority in human trafficking investigations and placed above all other matters.

Instructor Victor Williams discusses the collaborative approach and why building and maintaining partnerships are key. All levels of law enforcement are needed to effectively investigate human trafficking crimes.  Furthermore, NGO’s and community partnerships are needed for creating community events, spreading awareness, and finding resources to help individuals who have been trafficked.

The investigative techniques and operational methods demonstrated in class resulted in separate occasions of identification and recovery of several victims, including minors who were being trafficked in South Carolina. Local, state, and federal law enforcement worked in collaboration to recover the individuals.

Homeland Security Investigations Special Agent Shawn Caines presented a local case study to the participants of several classes. The case involved the disruption of a sex trafficking ring that resulted in the federal prosecution of more than 9 traffickers involving over 100 victims. The case was investigated in collaboration with Det. Charles Benton Jr. from the North Charleston Police Department. Detective Benton also presented to the class when ERASE’s training was held at Charleston County Sheriff’s Office in November.